10 strangest world records of all times

Have you ever been in that awkward situation where somebody asked about your hobbies or talents and you went all like “Do I really have any?” Well, read this list on, you might as well just find yourself a new hobby and perhaps, a way into the Guinness World Record book.

10. Most bottle caps removed – from the forehead 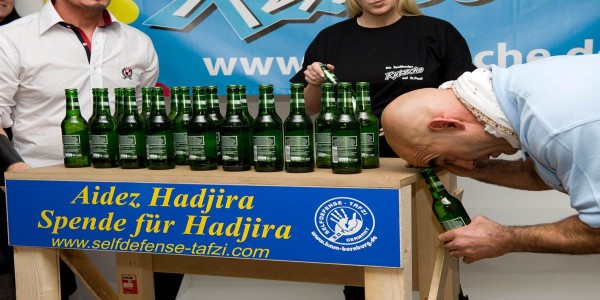 How many times has it been that you are all set to start your Saturday night, with pizza and beer by you – but then, in that moment, you realise how you forgot to buy the bottle opener you promised yourself to buy? It’s a horrible moment!  Ahmed Tafzi of Hamburg, Germany felt the same way one good day and that’s when it stuck to him – let’s do it with the head. He did it pretty well really, actually. So much so that he owned himself a Guinness title. Necessity and inventions, well.

9. Loudest purr by a domestic cat 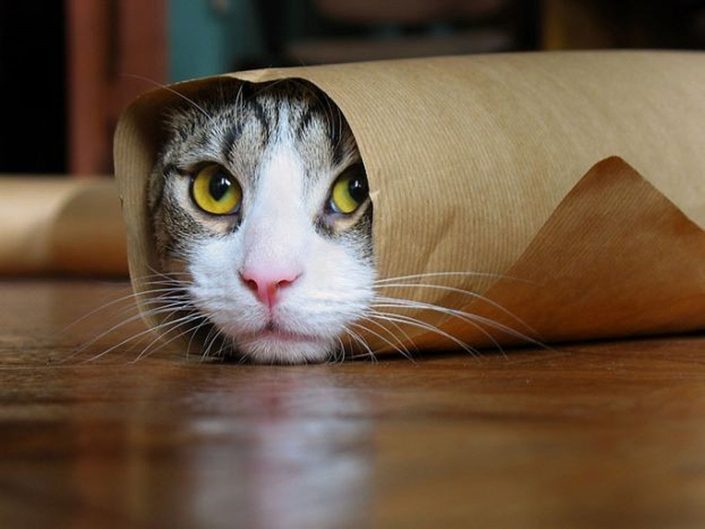 When it comes to expressing love, Smokey well knows how to break all records; quite literally. The loudest purr recorded by a domestic cat is 67.7 dB, which is held by Smokey. As per the GWR website, “Smokey is a domestic cat and achieved its record in its home, where it felt relaxed and happy. Accessories used during the record attempt include a grooming brush, slices of ham and stroking by hand.” So now you know, it’s not just you, any creature ever is the happiest when fed and put to sleep.

Sorry to break your zen but we aren’t in business with Eminem here. A man called Rebel XD sang a whooping 852 syllables in 42 seconds in 2007 to beat his own previously recorded Guinness World Record for Fastest Rapper. As impressive as it may sound, as a  fact it’s almost impossible to understand anything he sings (read: spits). Busta Rhymes might consider taking a few classes from our dude here. 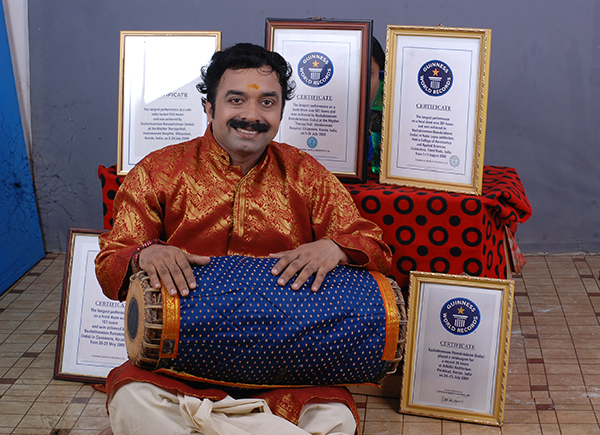 Kuzhalmannam Ramakrishnan, a percussionist from South India, put on a concert at the Rhythm Therapy Hall in Kerala, India in 2009 which lasted a record-shattering very long 501 hours. Divide it to make hours and that is roughly about twenty-one days of nit just any, but solo hand drumming. In the meanwhile, I cannot remember the last time I concentrated on something for even as long as 501 seconds really. 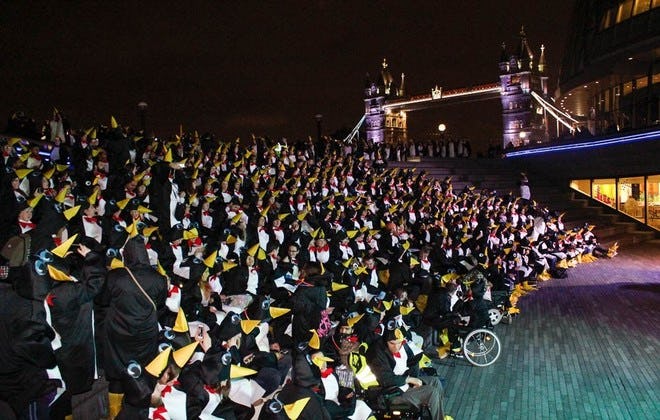 The record that was recorded in London actually had 624 people dressed as penguins from head to toe in an amphitheatre located near the River Thames. As stupid as it may sound, the actual reason behind this act was however noble of its kind. It was all organised by the Richard House Children’s Hospice as a fundraising event and it raised over $25,000 for children suffering from life-threatening health conditions and their families. The Penguins’ get-together was the third gathering held by Richard House Children’s Hospice and with this one, they beat their own previously set record. 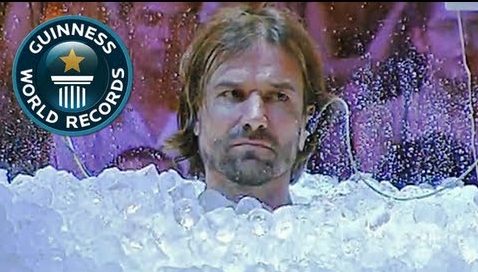 The chilling record in the name of Wim Hof from The Netherlands, spent an hour and fifty-two minutes, forty-two seconds in direct, full-body contact with naked ice. Hof, for this record, was also featured in the Discovery Channel’s Extraordinary People series. To all you folks updating snap chats with a weather filter that shows -40-degree Celsius, what have you done all your life? 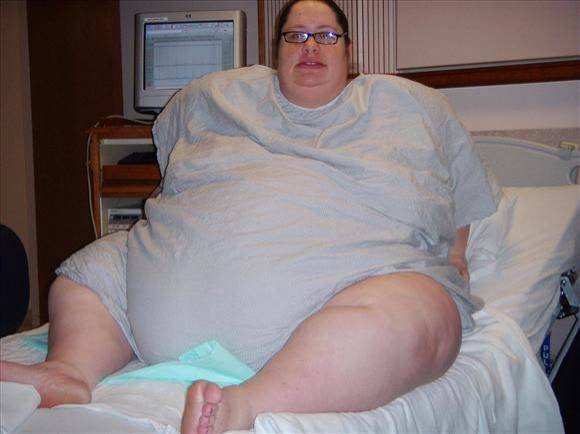 Do you remember your last summer vacation, and the month after when all you did was regretting to have eaten so much and gain weight? Well, we have a little something to make you feel better. A woman called Donna Simpson, of New Jersey, USA weighed 602 pounds (273.5 kg) in 2010. Donna ate about twenty thousand calories each day, moving as little as possible; she even set up a website where people paid to see her eat. Aiming for a weight of 1,000 pounds, her weekly grocery bills used to be about $650. Eventually, though, she gave up the record due to financial reasons and even followed a diet before giving birth to avoid medical complications. 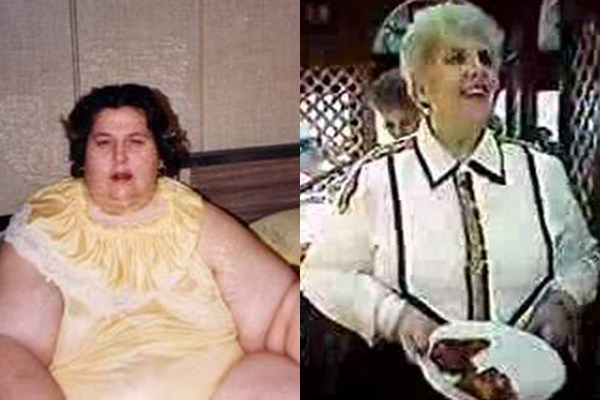 Talking about weight, there also happens to be a record of fastest weight loss. Rosalie Bradford has recorded a weight loss of  917 pounds in just three years. The process began when she weighed a scary 1,199 pounds and right in the first year, she managed to lose 420 pounds. Such quick weight loss required a lot of starving and intense exercising without proper food intake for Rosalie. The fat was burned off but she even lost her muscles and so, at the age of 63, at 282 pounds, she died of a heart failure.

2. Holding the maximum living snakes in the mouth

Recorded in 2009, Jackie Bibby, held 11 full grown snakes by their rattling tails for 10 seconds in his mouth. We don’t know if this world record is crazy, weird or brave but the risk involved was obviously very high. Bibby, however, claimed that eleven isn’t all that many. At the eleventh second, however, he spat them out and escaped any bites.

1. Most Guinness World records held by a man 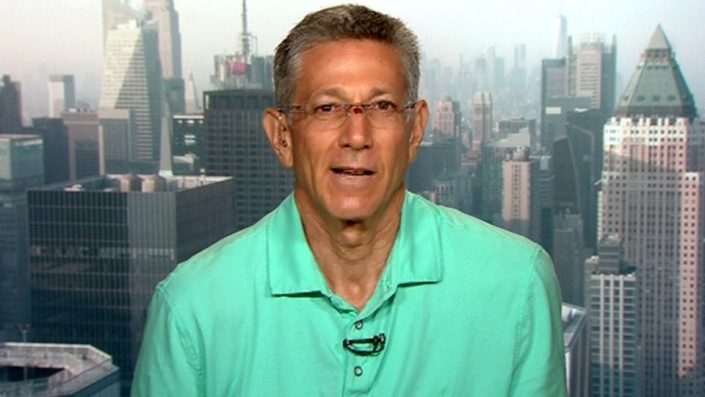 Here, let’s begin talking to the daddy. Ashrita Furman, probably the world’s only truly professional record breaker, has dedicated his life to cracking every single record possible, and the results record breaking in the truest of senses. His record includes like that of jumping jacks, underwater rope jumps in one hour, highest mountain climbed on stilts and creating the world’s largest pencil. A number of as high as six hundred records were set him until the year 1969 and he still told a glorious two hundred of them! Such record, much respect!