10 Most Expensive Alcoholic Drinks of All Time

There are many kinds of drinks found in the world, seeing the fact that alcohol is being made since the late 2000 BC, when the Greece drank their first wine, it is theorized. Now, so many different kinds of alcohols are available for everyone, but the question is, is your longing so big that you will buy alcohol worth a small island’s price? Here we are with the most expensive alcohol in the most popular categories.

(Antarctic Nail Ale – $800 USD for 500 ml)
In the bubbly (and relatively cheaper than other drinks) beer universe, the Antarctic Nail Ale is the most expensive beer brand at a whopping 800$ for just 500 ml. Yep, it exists. Why is it so expensive? The water from the Antarctic ice berg that’s melted is dug by the society of sea shepherd conservation and that water is used for this beer production, hence it is mainly the logistics that affect the price this much. Launched by famous Nail Brewing Company, the brand claims that the beer is so good that you will become an alcoholic (which is a kind of advertisement we don’t think can earn a customer’s trust, as it is practically a drug!) 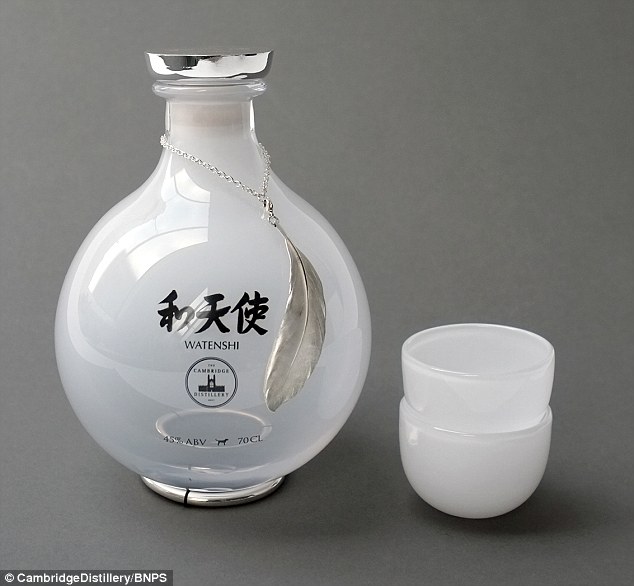 (Watenshi – £2,000)
Our warm in the winters, cooler in the summers drink, gin, is also a kind of alcohol that is not that expensive as compared to other drinks and it was evident from the fact that the Watenshi Gin, at a high price of £2,000, is four times more expensive than the previous record holder. These limited edition bottles that were six in number were made by Will Lowe after he found a way to capture the ‘angel’s share’ – the minuscule amount lost to evaporation during distilling – of his premium Japanese Gin, i.e., he collects 15 ml of evaporated gin from each distillation in a unique ‘trap’ chilled to a freezing -75 degrees C using dry ice, and it takes 100 distillations to make just one bottle of the rare gin. He claims Watenshi is like nothing else on the market, and is comparable to the finest single malt whiskeys in its intensity and complexity. It has to compensate for the price though, seeing that exclusive tipple is more than 130 times pricier than a bottle of regular Gordon’s gin. 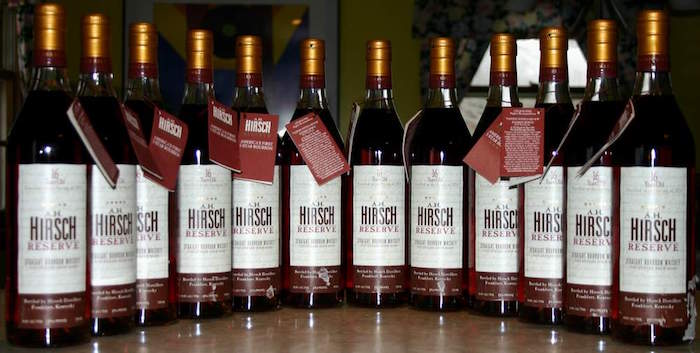 (A.H. Hirsch Reserve, $2,700)
The drink of the nobles, bourbon, is still affordable for laymen like us. But the bottle that claims that you don’t mess around with your drinks is exclusive tipple is more than 130 times pricier than a bottle of regular Gordon’s gin  A.H. Hirsch Reserve. (The fact that it’s no longer produced is your first problem; the price is your second.) The aroma is said to be powerful and memorable. Basically, if you made a cocktail with it someone might have a heart attack (but why?). There’s also a Humidor Edition which comes in a mahogany case with a cigar, but then you’re just showing off and flying too high above the sky. 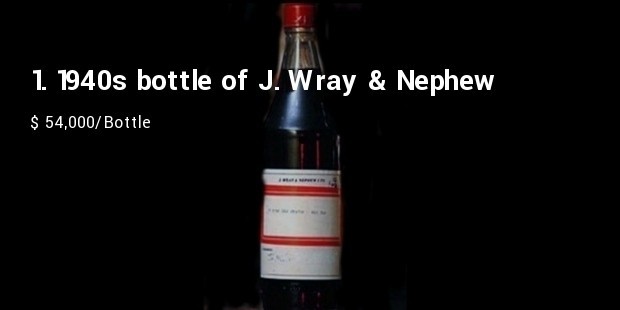 (1940s bottle of J. Wray & Nephew – $54,000)
Unlike many expensive liqueurs that are priced high due to their bottles, or designs, etc, the most expensive rum retailed for its huge price has its value so high entirely due to the quality, age and exclusivity of the drink itself. It is from Jamaica- the land of pirates who loved their rums. J. Wray and Nephew is one of Jamaica’s oldest rum producers and the rum was made roughly 70 years ago and now, only four bottles of this $54,000 rum are left as Trader Vic, after tasting this particular blend, reportedly claimed he would use no other rum in his cocktails. His establishment literally drank the stash almost out of stock. 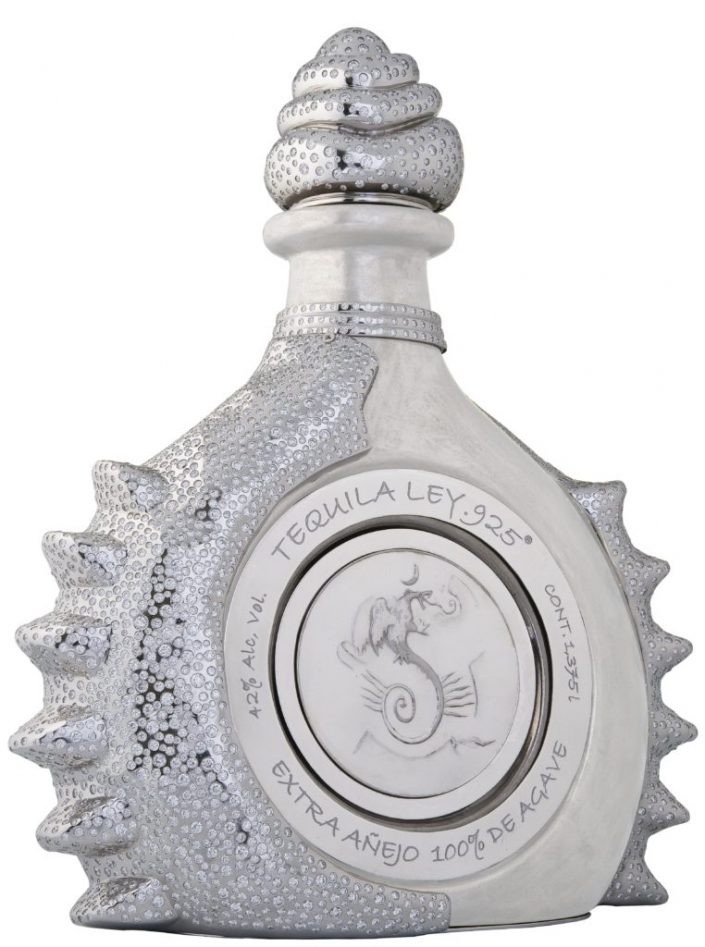 (Tequila Ley – $225,000 to $1.5 million)
Tequila is the drink that forms the edge between a party and a wild party- or simply (mostly), a wild-party and havoc-in-the-basement-call-911 and at $225,000, even the most expensive tequila in the world might be a bit too much even for the Wildest (and Wealthiest). The cost, sadly, is due to not the drink but the bottle that holds it. It comes in three different bottles- of White Gold and of Purest Platinum held together by a central medallion of Platinum but it is the third that is priced the highest as it is made out of pure diamond encrusted and costs $1.5 million! Do you think Tequilas are worth all this dough, or would you rather stick to your $10 bottles? 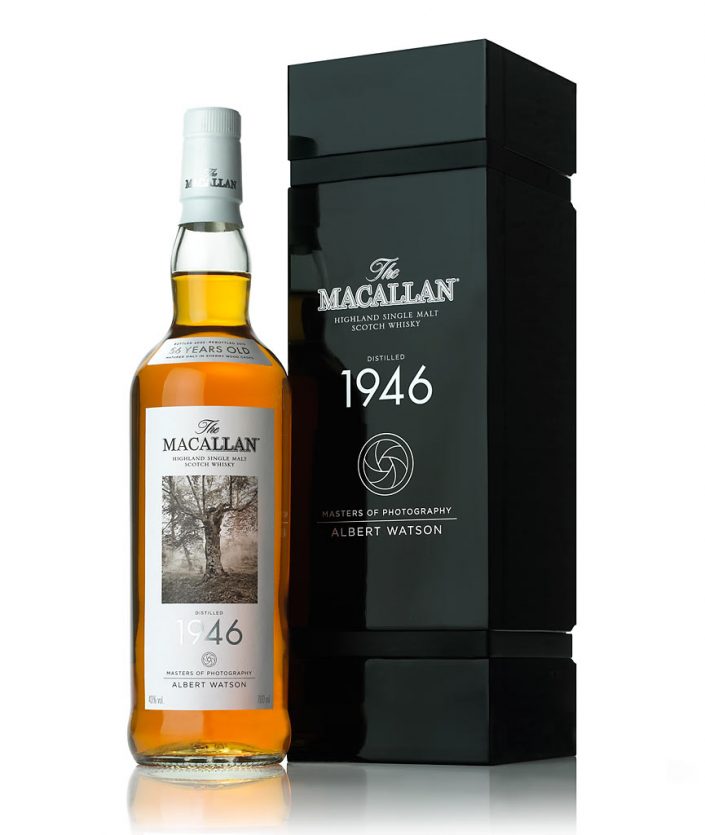 (Macallan 1946 – $460,000)
A single malt whiskey made the top of the list when it was sold at a charity auction where the samples sold at auction raised $145,000 and the bottle itself sold for a whopping $460,000! It is said to be vetted together 3 different casks built from Spanish oak seasoned with sherry and its unique decanter is designed by crystal artist Lalique. If you are a true whiskey- admirer then the warm and smooth taste of this amber liquid might entice you into spending all you have into buying it. 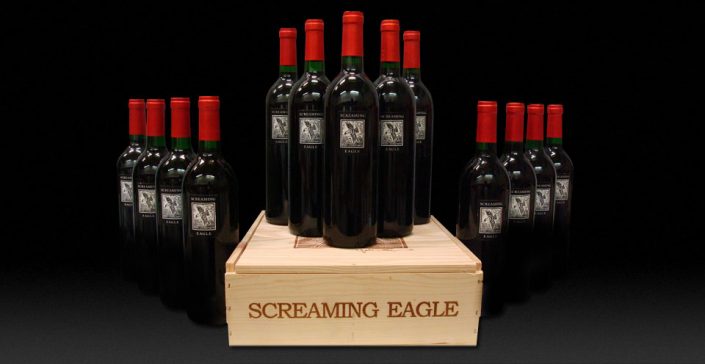 (Screaming Eagle Cabernet 1992 – $500,000)
The wine is the drink that is considered “safe” but you might change your perception as the price of this most expensive wine might give you a heart-attack! The Screaming Eagle is sold at auctions or by an exclusive mailing list, as, it was one of the rarer wines for such a new vintage. The bottles were sold in up to 6 litre bottles so people were ready to buy it as it meant you can enjoy the most expensive wine for longer. Last, it was sold at a charity auction in 2000 for $500,000 the high demand quickly ran through the supply of this new wine. Not bad for a wine that had only gone to market 5 years earlier, in 1995! 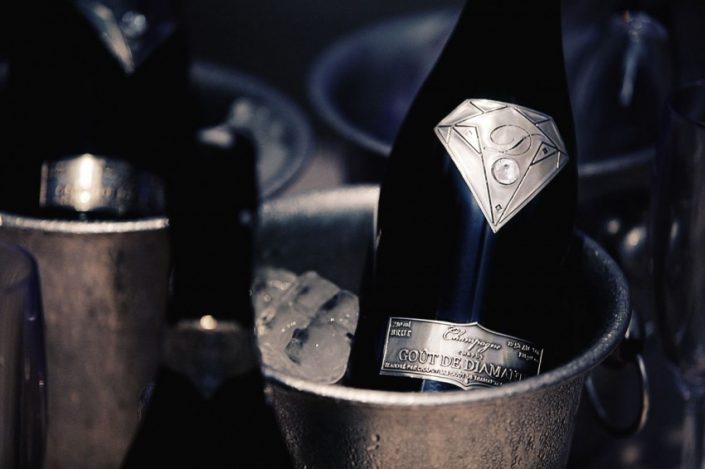 (Goût de Diamants, Taste of Diamonds – $2.07 million)
This is the most expensive bottle of the celebratory drink, Champagne, and the most exclusive one too, as it was made for an unnamed private client, for a whopping $2.07 Million (what even). True to its name, this “Taste of Diamonds” bottle is handcrafted from 18-carat gold for its logo, with a deep cut white diamond (as if gold wasn’t enough) that weighs 19 carats, instead of the Swarovski crystal that was once placed in the logo. To top it all, even the label is made out of gold with the buyer’s name engraved on it. Inside this heavily prized bottle (come one it’s not the drink anymore that is prized this high) is a blend of Grand Cru Chardonnay, Pinot Noir and Pinot Meunier that offers a floral, refreshing and creamy texture and ends with a light and elegant finish, says the champagne maker. And to conclude, it was indeed the bottle by Alexamder Amosu that holds the million-value. 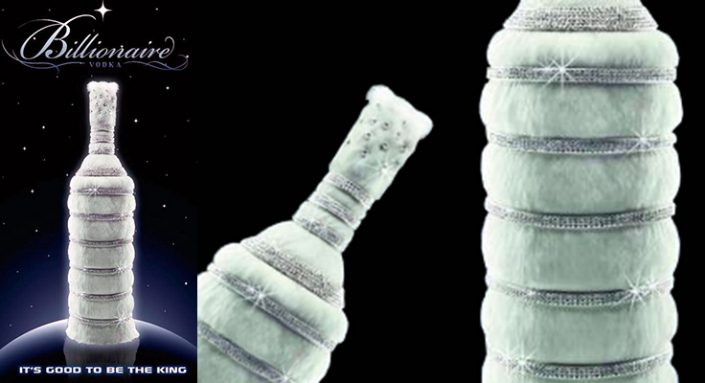 (Billionaire Vodka – $3.7 Million)
The go-to drink for every occasion, vodka, is supposed to be the cheapest too-well, not anymore. Leon Verres’ “Billionaire Vodka” will cost you a staggering $3.7 million. Honestly, what even? You shouldn’t call it Billionaire’s Vodka if it’s not worth a billion (eye-rolls). But unlike the predecessor on the list, this vodka is actually passed through diamonds to remove impurities, and the 5-liter bottle is adorned with 3,000 diamonds and faux fur. It seems like a fail but, as vodka which costs $3.7 Million USD is simply not affordable unless you have a few hundred billion dollars at your perusal. As claimed by the producers (and not us, we won’t write blogs if we could afford it), this bottle is filled with 5 litres of the purest and softest vodka. But the diamond distillation cannot justify the price so of course, the bottle is studded with 3000 real diamonds at last count (don’t faint yet, there is still number 1 left you guys). 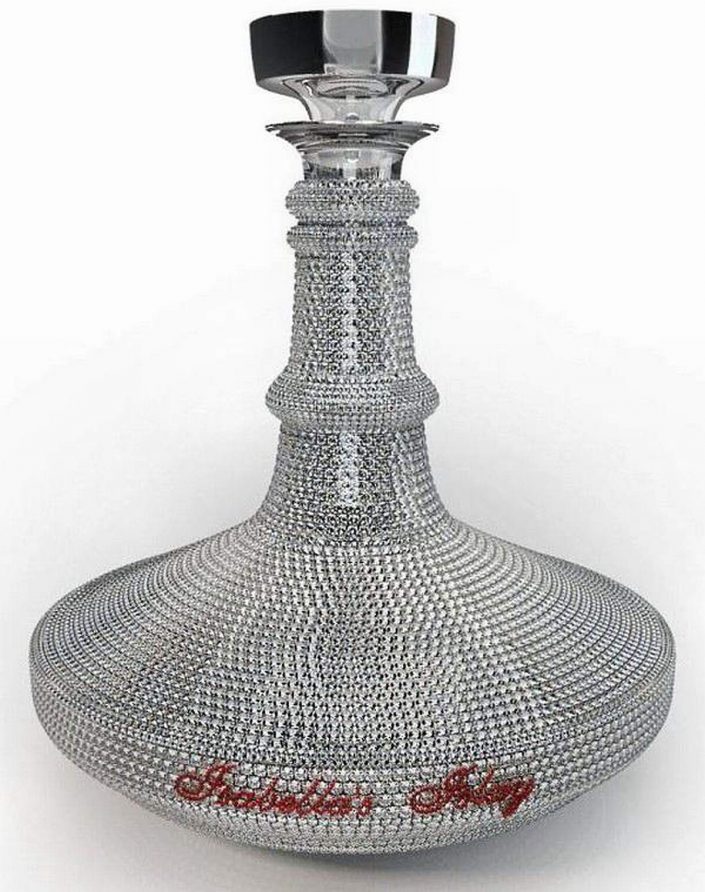 (Isabella’s Islay – $6.2 Million)
Honestly, we aren’t surprised that a scotch would finish the list, being most expensive out of the lot. But what might give you a heart attack is the fact that it is for a staggering  $6,200,000 (we weren’t playing mind games when we wrote that in the subheading). The Crystal Decanter isn’t of crystal finish, as 8,500 diamonds cover the crystal area (now you can pass out) This bottle is sort of cheating its way to the top spot as it also has 300 rubies and white gold (who gets satiated after almost 10000 diamonds). Honestly, who would even care for the inside contents if they have a bottle this fancy? All in all, it is still the most expensive bottle in the world (we wrote bottle intentionally)

To end this list, we come to a conclusion that people, in order to make the most expensive bottles of alcohol, are forgetting all about the real thing- the alcohol itself, as it is evident from the list that the bottles aren’t bottles anymore- they are a frickin piece of jewellery!